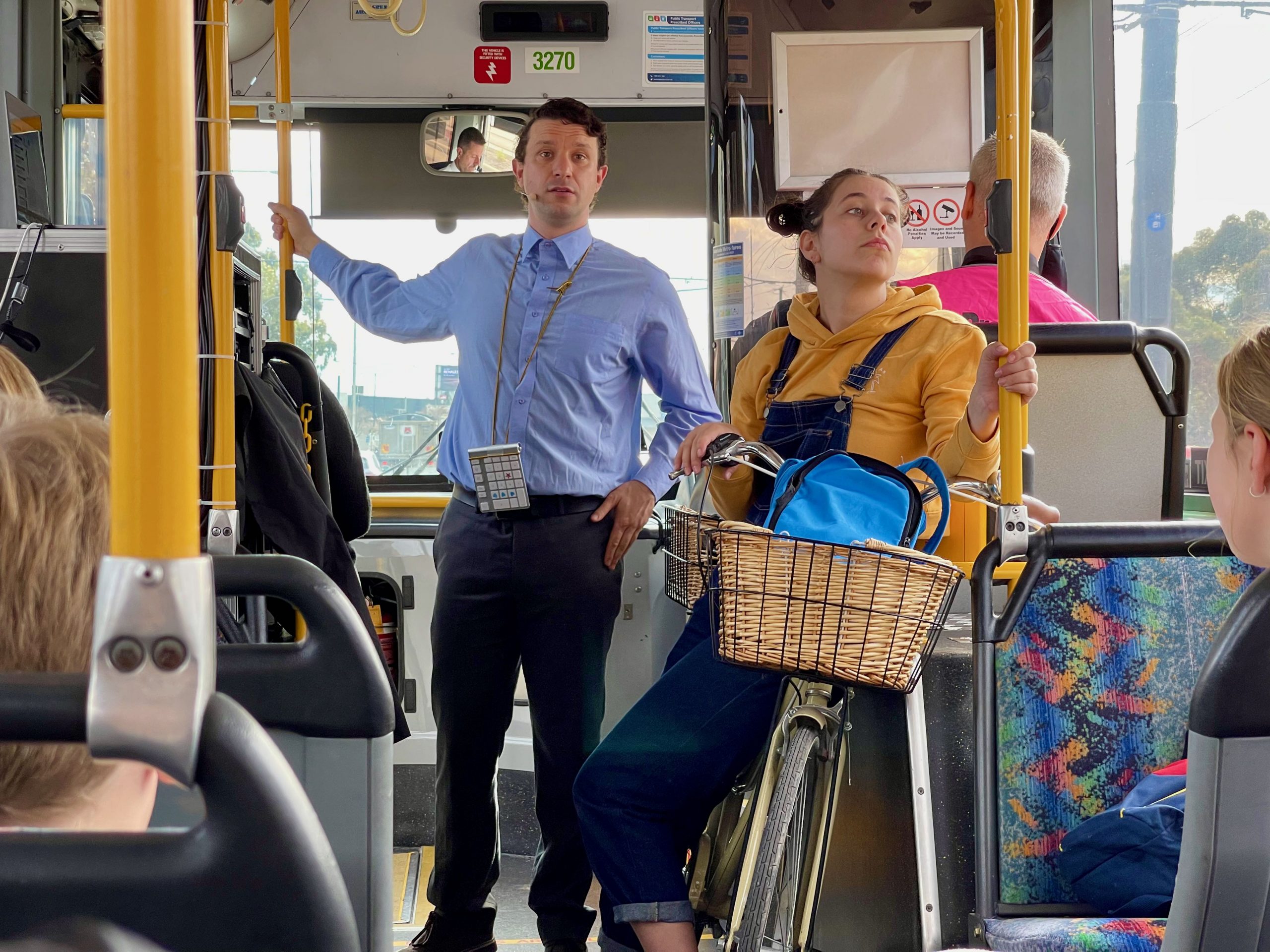 Ever caught a bus to watch a theatre show unfold outside its windows? Me neither.

That is, not until I saw The Narrator, as part of the DreamBIG Children’s Festival this week.

That’s the intriguing concept behind the show. The windows of the bus act as screens through which the audience watch a classic story of childhood rejection and betrayal unfold in real time. 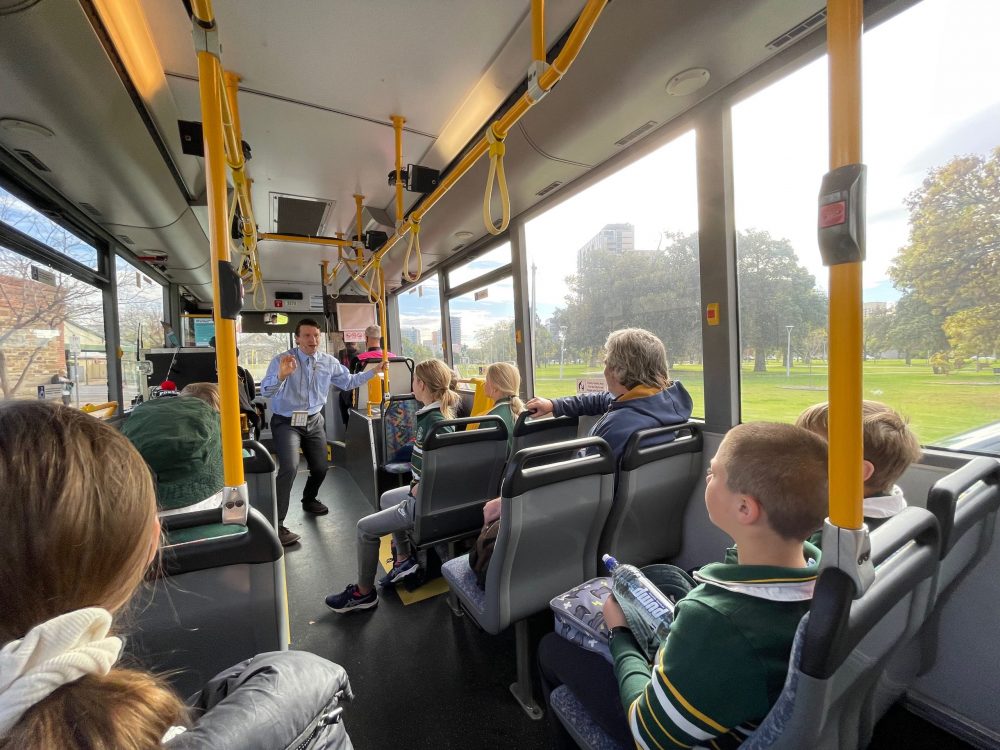 We jumped aboard for the unique bus trip at Elder Park, with the yarn kicking off once a maths geek-style narrator (Zak Pidd) climbs on at Victoria Square. During the show, you realise he’s controlling the sound effects and musical backdrop with his ‘calculator’ and laptop while performing – quite the feat.

There’s also a lot of skilful adlibbing on his part. Real buildings and pedestrians become part of the story. He talks about such things as family picnics in Whitmore Square, and pondering about a statute in Chinatown as a kid – “I always wondered, ‘How did that person turn into bronze and sit like that?’” 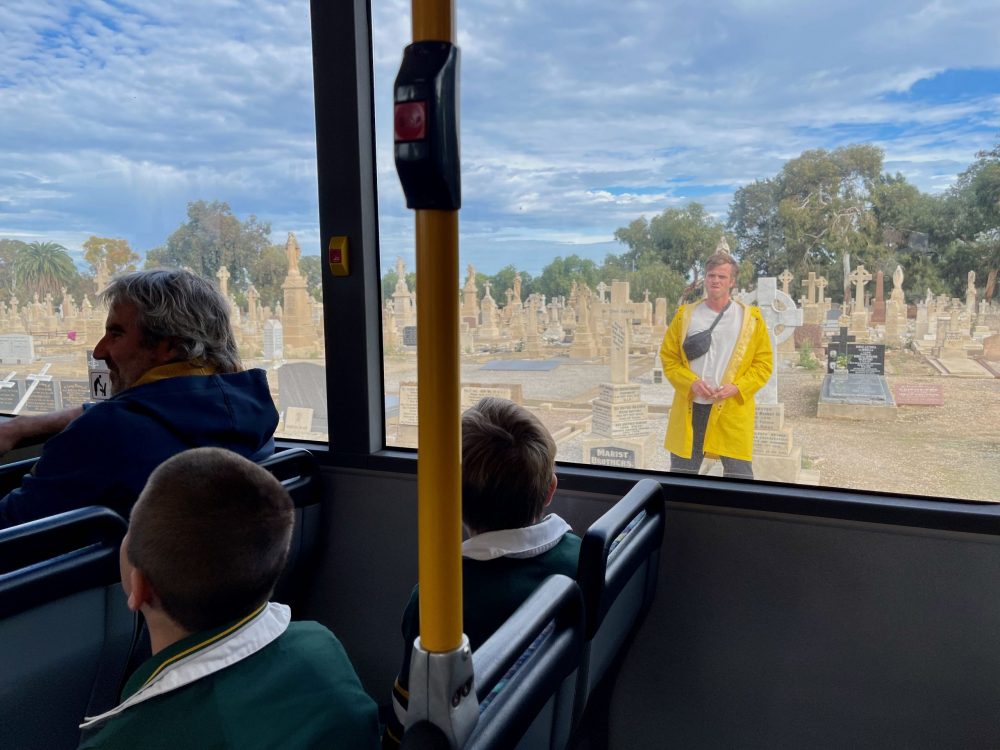 The hour-long show’s a great way to see Adelaide with fresh eyes and visit pockets of the city you wouldn’t usually. (Note to self to return to Field Street, off Chinatown, and visit Dumpling City and its Asian grocer!)

Live actors also appear and disappear beyond the windows – from a young boy fixing his bike on the verge to a lass dropping a bucket of popcorn on a street corner. 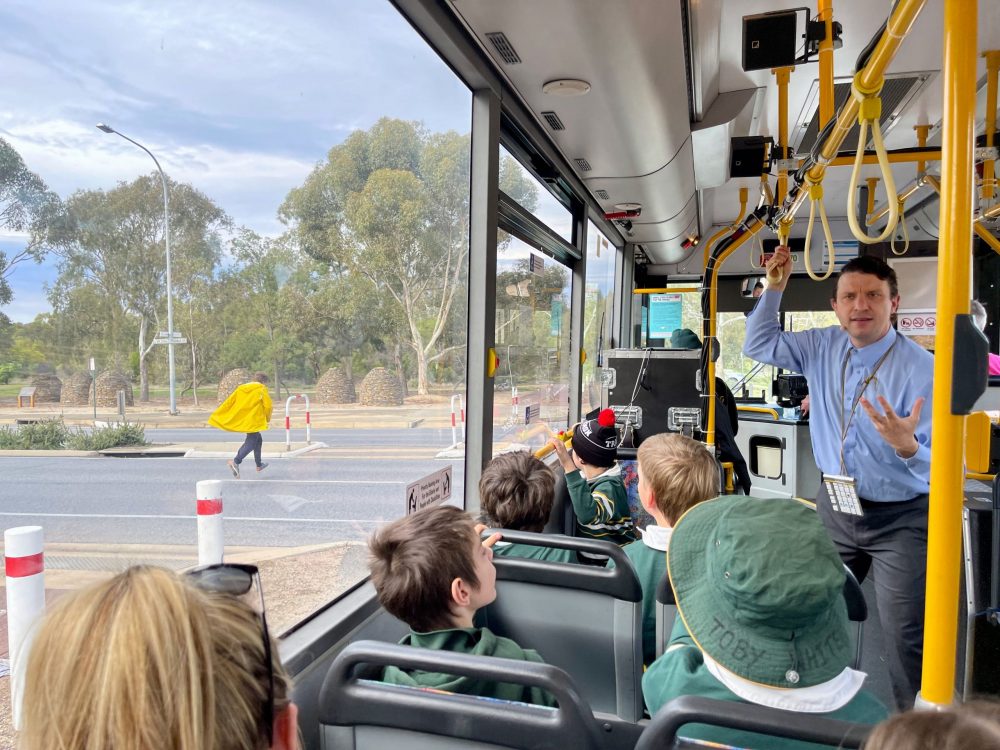 The story follows a lad, at different ages, who’s quite the lone wolf until a new girl arrives at school. The narrator says: “There was a time he thought she was the greatest person in the world, when they were friends … She even got a yellow top so he wouldn’t be the only one.” (My visual side liked how the actors’ yellow tops complemented the bus’s yellow rails and ticket machine.)

The young friendship goes pear-shaped, however, when the girl doesn’t own up after something bad happens.

Thanks to the narrator’s proximity to his audience, the show’s quite interactive. He involves the kids onboard in the story, asking questions like: “Is she on the roof?”

Also fun is seeing how people, who aren’t involved in the show, react to the theatrics playing out – like when an actor’s dashing around in a yellow raincoat at Bowden and there’s a bemused bloke spraying weeds nearby. 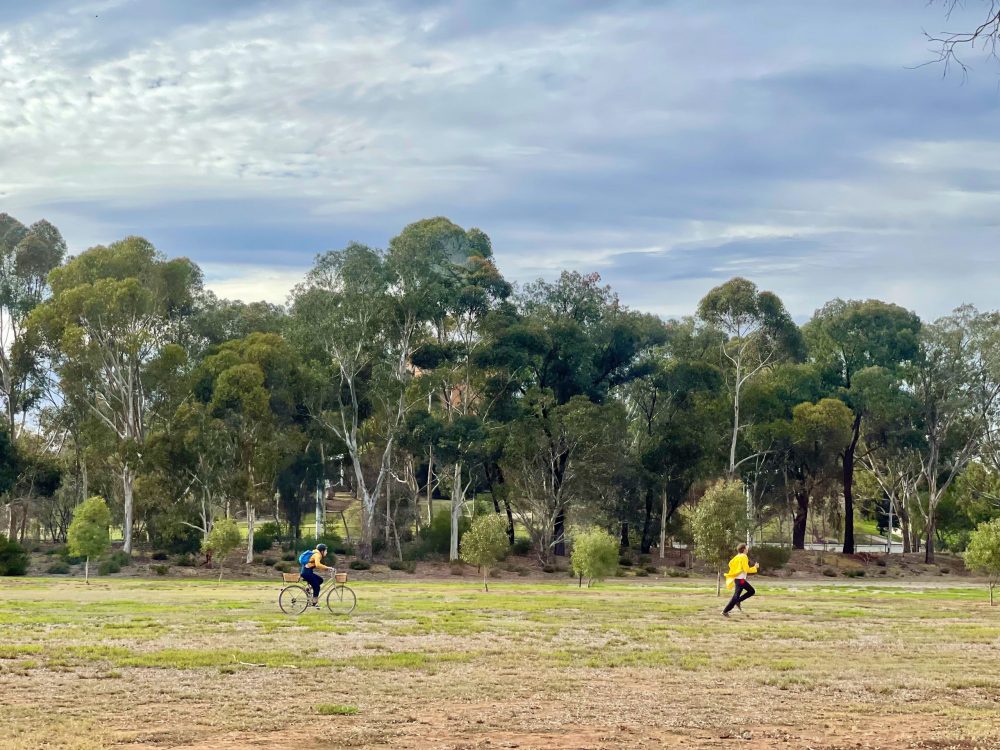 There’s one point in the story when the narrator points out ‘magical’ trees, which supposedly grow Tim Tams and iPods. It reminded me of chattering with my cousin, as young flower girls, about seeing fairies and elves out the window of our wedding limo.

And I guess this is the point of the show: to rediscover that childlike sense of wonder and imagination. 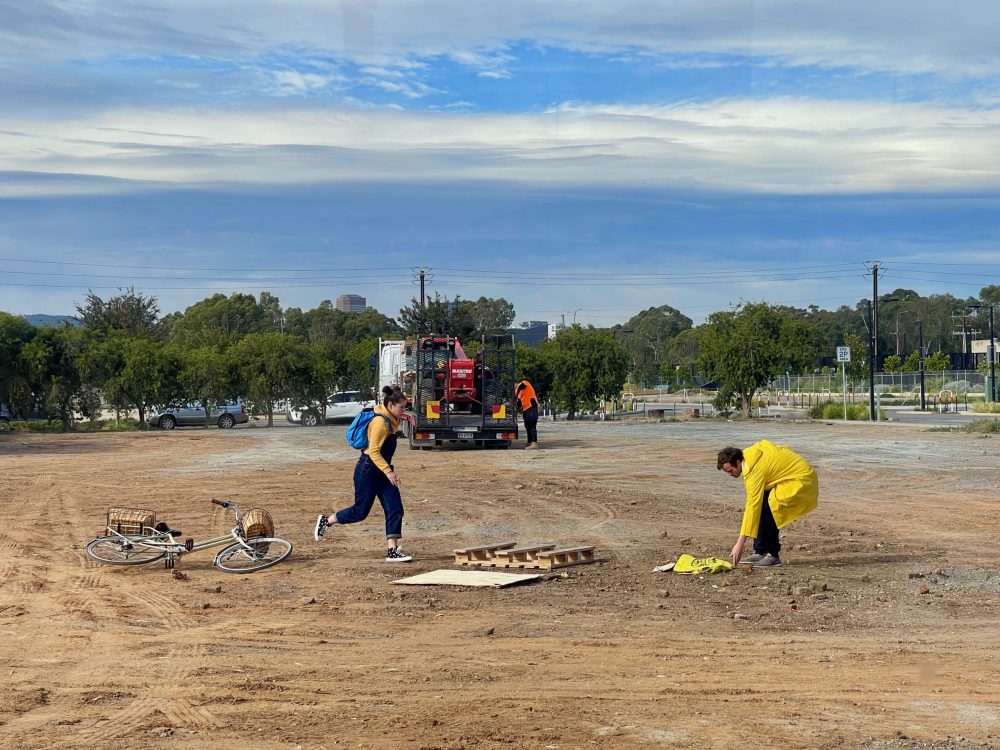 After the bus trip, I spoke to the show’s Melbourne creator and director, Jessica Wilson. The production was developed through a residency in Latvia, where she collaborated with a team of local artists and children.

Jessica describes its concept like “painting onto the real world”. “Instead of building a set or doing something in a theatre, you’re actually using the outside world. And I also love that it feels very much like you’re inside a film as you’re driving around.”

She adds: “All our cities are made by adults, and we’re always telling kids what they should do and how they should be. So, to see a story of a kid, and it’s almost like they’re owning the spaces that they’re in, and it’s their narrative in the real world – I’m just interested in that as an artist.” 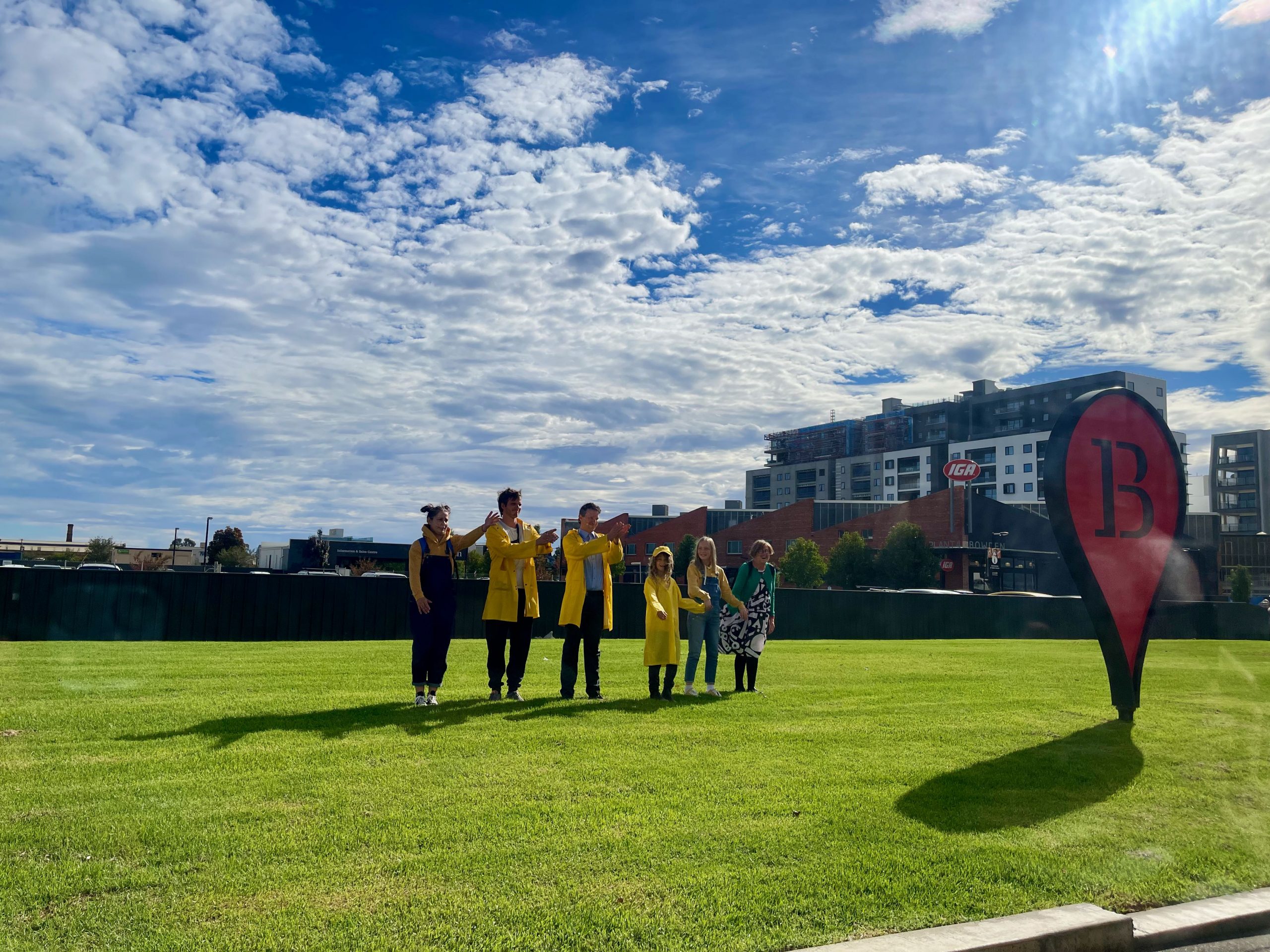 The routing and timing proved tricky, however. “[Originally] I made it on a tiny town in Latvia, where you can weave in and out and stuff, and people can run.” But Adelaide presented a new challenge. “You need to think of interesting sites but also how [actors] are going to get ahead of you on the bus. There are all these backstage shenanigans going on, with vans zooming off up shortcuts.”

The tale was also adjusted slightly for its Aussie premiere. “We had to rewrite it a bit to suit this route and make it more Australian,” Jessica says. “There’s quite a lot of nuances we changed. It’s interesting; the way we worked with the girl [character] in Latvia was a bit more patronising actually. She was sweet but there was some kind of gender politics, which wouldn’t have worked as well here. I mean, it was funny – it wasn’t demeaning – but the kind of binary of the boy/girl thing was stronger there.”

This is one bus ride you definitely don’t want to miss!