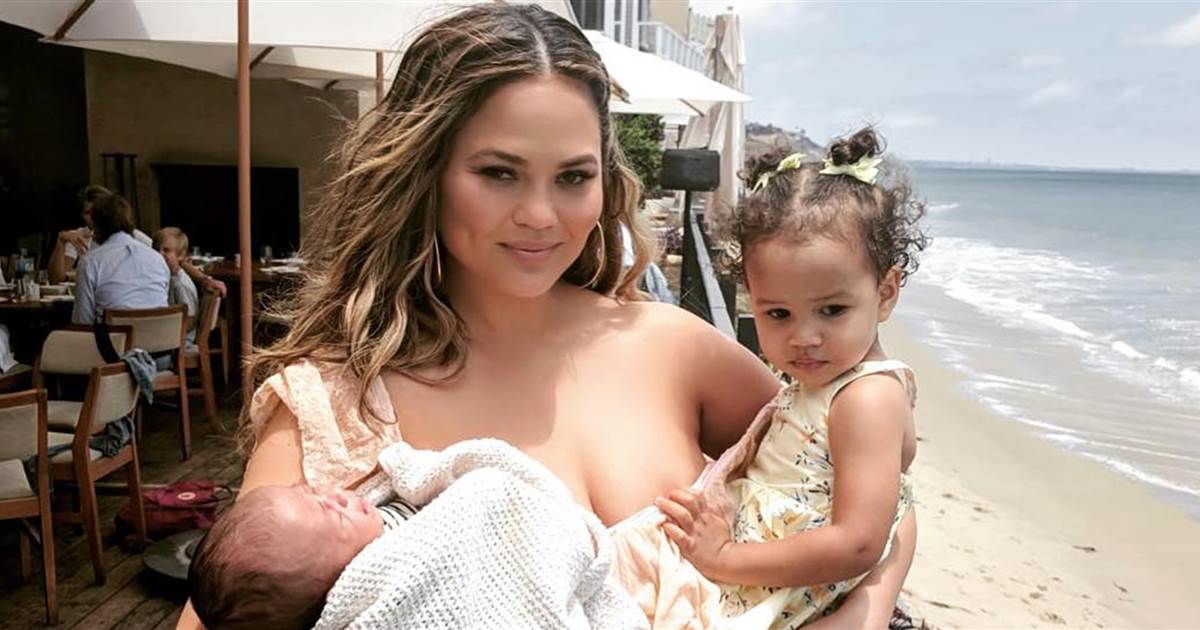 Frankly, this glorious woman’s ability to be real about motherhood is a breath of fresh air amongst the oftentimes sepia tones of insta-parenting, and today she’s said something that so many of us have wanted to get off our chests (pardon the pun) for so long.

And the collective community gasped.

Now don’t come for me, I’m all for breastfeeding. In fact the absolute wonderment of breastfeeding is not lost on me in any way. Especially as a woman who desperately tried to breastfeed my twins (and subsequent third baby) whilst struggling with low supply, for.months.on.end.

I longed to exclusively breastfeed.

I was envious of people who could.

They say the grass is greener on the other side of the fence; well it felt like my side was the pasture being grazed bare by all the grass-fed formula cows.

So when I saw Chrissy Teigen tweet on Sunday about how difficult it can be to breastfeed, calling for people to help “normalise” feeding their babies formula when needed, suddenly I felt so SEEN.

And also so annoyed that we should have to be saying this at all. 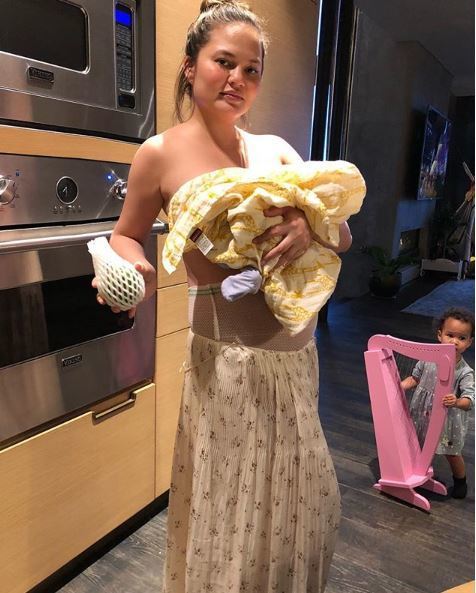 “OK I’m gonna say something and you all are definitely gonna make it a thing but here goes: normalise formula,” Chrissy wrote, and subsequently went on to share her thoughts on the matter.

“Normalise breastfeeding is such a huge, wonderful thing. But I absolutely felt way more shame having to use formula because of lack of milk from depression and whatnot,” she continued.

Recognise that breastfeeding is not possible for everyone

She went on to comment that “anxious” new mums are often told “breast is best”, but it’s important to understand that’s not possible for everyone.

And at this point I was basically yelling “YES YES YES” at my iPhone because this is a thought I’ve wanted to get off my chest for. so. long. But Chrissy Teigen has 13 million followers and I have about 13 so if one of us had to do it, I’m glad it was her.

Because on the other side of aforementioned fence (the fence I thoroughly believe we should just knock down completely so we’re all in one fresh, happy, fruitful pasture together not being grassholes to one another!), with my twins now 8 years old, and my youngest recently turned 6; my babies are indeed BEAUTIFUL. PERFECT. AND OKAY.

And they were fed formula.

Even writing that makes me bristle a little bit with a shame hangover and an intense need to clarify that I actually mix fed, a combination of the F word (formula) and the BrEaST word (breast milk) because still there’s an underlying guilt within me that wants people to know “but but but, they got breast milk too”…

Because you’re damn right I felt shamed that despite my absolute breast efforts (pumping after every feed – even at 3am – drinking 80L of water a day, seeking the help of lactation consultants, feeding on demand, eating ALL the lactation cookies – especially the ones with mini m and m’s in them) I still had to give them formula.

My teeny tiny twins. I HAD TWO FRICKEN BABIES. And still I felt like I wasn’t doing enough. I wasn’t good enough!

Shamed enough to hide the steriliser and the bottles and the formula tin when I knew people were coming to visit. 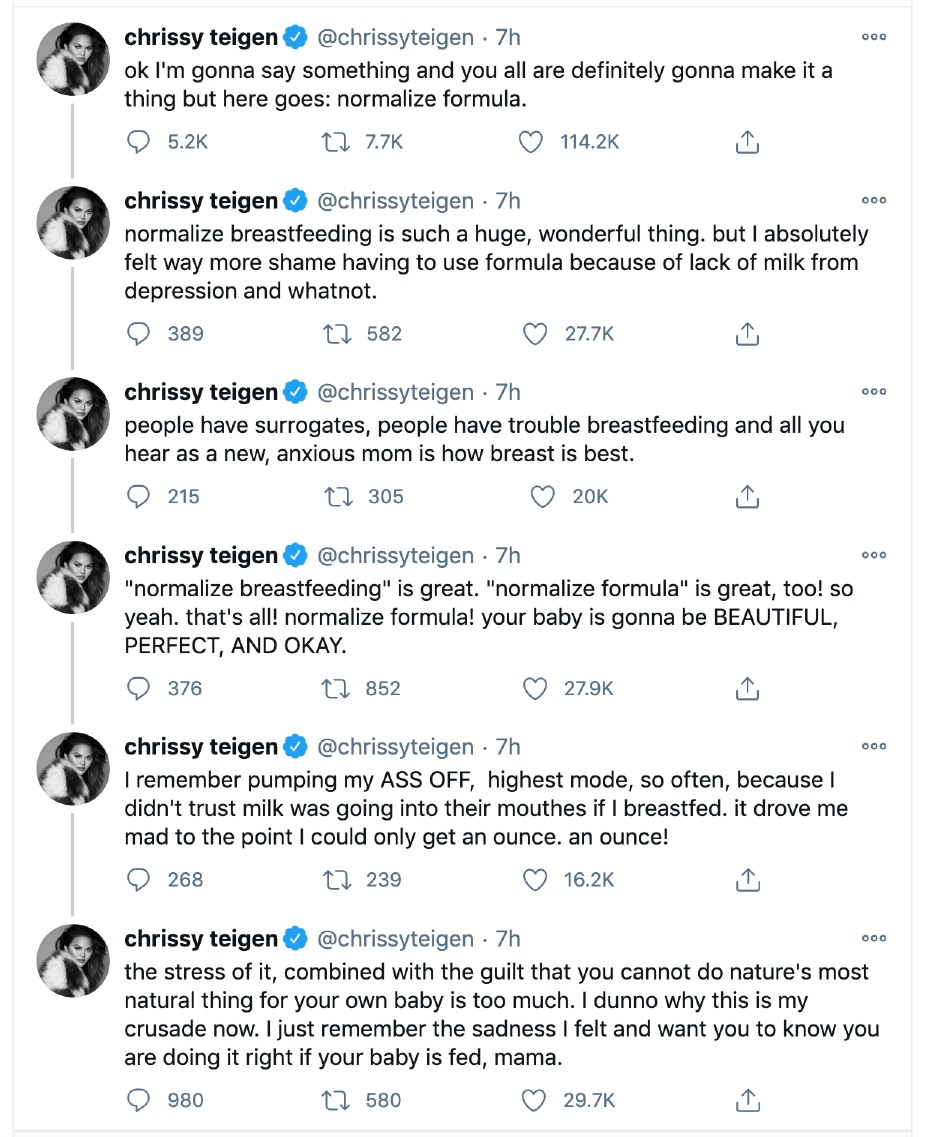 Teigen went on to recall her own struggles with breastfeeding her children and low milk supply saying she would often pump in the “highest mode” because “she didn’t trust that milk was going into their mouths” when she breastfed.

“It drove me mad to the point I could only get an ounce. An ounce!” she said “The stress of it, combined with the guilt that you cannot do nature’s most natural thing for your own baby is too much,”

“I dunno why this is my crusade now. I just remember the sadness I felt and want you to know you are doing it right if your baby is fed, mama.” 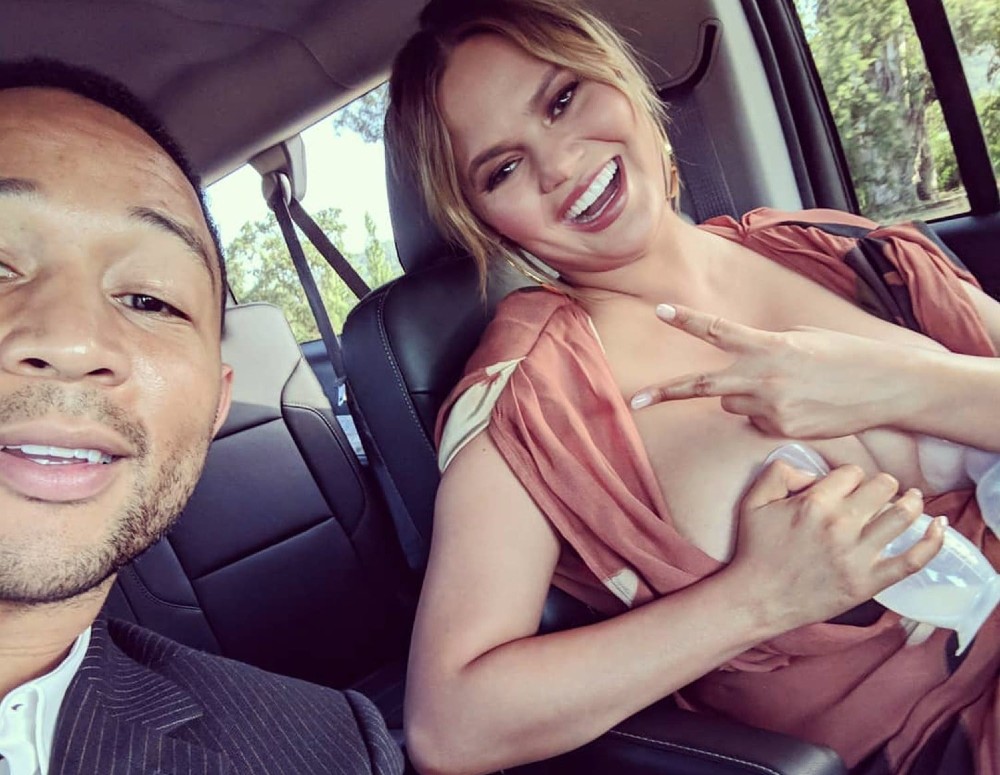 Using her not insignificant platform to speak out for mothers who use formula, Chrissy elaborated;

“People have surrogates, people have trouble breastfeeding and all you hear as a new, anxious mom is how breast is best,” adding that what’s important is that a baby is fed.

Or better yet – SUPPORTED is best!

To have a high profile mother try to reduce the stigma around feeding your baby, to lean in to expanding the definitions about what it means to be a good mother and to do your best with what you have, is something we can all get behind, because the mum shaming has to stop!

Responding to some of the comments beneath her tweet which currently has, at the time of publication, over 110K likes, 5.2K responses and 7.7K retweets, Teigen signed off with;

“‘Normalise minding your f***ing business as long as it is not hurting anyone else’ needs to be a T-shirt lol”.