Getting “Brainy” About Childhood Development 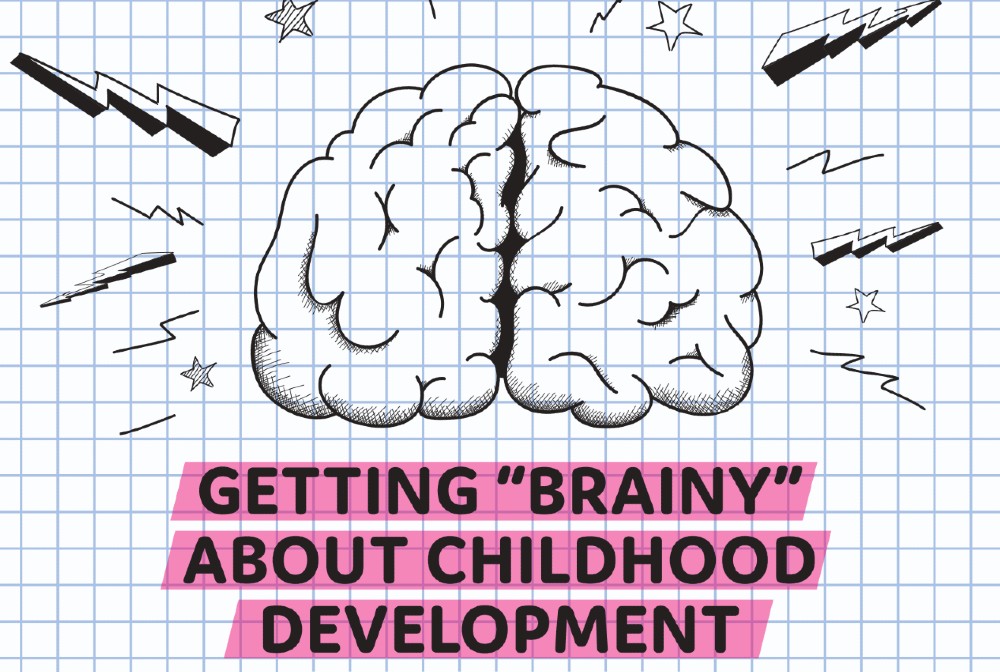 Getting “Brainy” About Childhood Development

We’ve all had that moment. You hold up your darling little bubba, look deeply into their eyes and think, “What the heck is going on in there?!?” What’s happening in the brains of our children can sometimes feel like a complete puzzle. Luckily, neuroscience is here to shed some light on the mystery!

Growth of connections between brain cells

By the time we are born, most of our brain cells, called neurons, have already migrated to the location that they will occupy in adulthood. Despite this, the size of our brain at birth is only about 25% of its adult size, with our brain volume increasing fourfold between birth and adulthood. Understanding what leads to this growth is key for understanding the significant changes that we see in sensory perception, motor abilities, and cognitive function as our children grow.

Most of this growth occurs as our brain cells connect with one another, a process known as synaptogenesis. This happens at different rates in different brain areas. For example, areas that are important for sensory functions, like vision and hearing, form these connections, or synapses, quite early on, with a rapid burst of synapse formation around 3-4 months, reaching ~150% of adult levels by between 4 and 12 months after birth. This is associated with the significant improvements that occur in sensory perception throughout a child’s first year of life. A similar process also occurs early within parts of the brain critical for motor function, which parallels the improvements in gross and fine motor skills that occur in early childhood.

In contrast, other brain areas connect much more slowly. In particular, the prefrontal cortex, a part of the brain critical for judgment, planning and reasoning, doesn’t reach peak synaptogenesis until well after the first year of life. It’s thought that this slow process of connectivity is important for the development of complex cognitive functions. It may also help to explain why it’s so difficult to convince your teenager to not make hasty decisions. In fact, studies suggest that the prefrontal cortex isn’t fully mature until our 20s (with some neuroscientists speculating that it might be even later!).

Pruning away of connections between brain cells

If you ask a gardener, they will tell you that pruning is key for removing damaged or weaker plants, in order to allow those that remain behind to function more effectively. Interestingly, the same process occurs in the brain. Synapses, or connections between brain cells, are originally over-produced, reaching peak density around 5 years of age. Following this initial over-production, certain connections are slowly pruned away. This also occurs at different rates in different brain regions. For example, the number of synapses in the parts of the brain important for sensory functions is reduced to adult levels between 2-4 years of age.

In contrast, reduction of connections in the prefrontal cortex doesn’t reach adult levels until between 10-20 years! This pruning away of extraneous synapses helps the brain to eliminate connections that aren’t useful and subsequently fine-tune its function. But why bother? Isn’t it inefficient for the brain to create so many extra connections, just to later remove them? Neuroscientists think that this helps to make brain circuits more robust and efficient.

So how does the brain “decide” which connections to maintain and which to eliminate? It appears to be critically dependent on the amount and timing of activity at the synapse. Another way to think about this is “use it or lose it” connections that are activated are reinforced and maintained, while those that are not grow weaker and are eventually flagged for pruning. This is exciting, as it means that the connections between our brain cells can be shaped by our environment and the experiences that we have, a concept known as neuroplasticity.

One powerful example of this is language. Very young infants respond to phonemes, the building blocks of language, from all languages. By 6-months of age, however, they show a preference for phonemes from their own language, and, by 12-months, they no longer respond to phonemes from languages that are not their own. By approximately 7-8 years of age, children lose the ability to learn and produce the sounds of another language at the same level as a native speaker. Instead, individuals who learn another language after this age will usually retain their original accent when speaking.

Given the timing of synaptic formation and pruning, it helps to explain why having rich and diverse experiences in the early years is so critically important. What happens to our children during this period can have a significant impact, laying the groundwork that shapes their brain activity for decades to come! So next time you look into your little one’s eyes and wonder what is going on in their head, remember that the answer is A LOT!

Help your child succeed by teaching them to fail