Traditional Chinese culture meets digital technology from Italy in this international collaboration that proves there are no barriers to global understanding. Step into a kaleidoscope of colour, sounds and imagery set against the soundtrack of traditional Chinese instruments
in Panda’s Home.

Children will join two dancers alongside a zitar player on this unique and immersive adventure through the rich cultural landscape of China. On their travels they’ll encounter bamboo forests and ancient traditions as they learn about the Chinese concept of Wu Xing (“Five Elements”)

Wood, fire, earth, metal and water and the harmonious cycle of nature.

KIDDO got the inside scoop from some of Panda’s Home artistic directors: 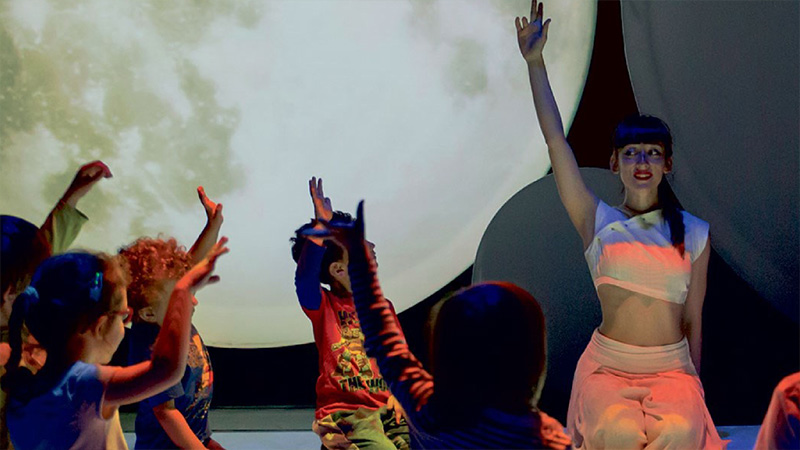 1) What is the story behind Panda’s Home?

“It was a long process compared to our other productions, and we felt this was necessary. I must start by saying that our city, Prato, has a very large Chinese community and often, sitting and watching our shows, there is a multitude of Chinese children. Panda’s Home was born in this context and its production was nourished by our curiosity and our desire to learn more and more about the traditions and stories belonging to a culture so distant from us, but at the same time very close to us in everyday life. This is the reason why, compared to other productions, we gave ourselves more time in preparing the show to deepen the themes and concepts we encountered.

“The collaboration with the director of Tong Production, Lizhu Ren, was fundamental. She guided us by suggesting the theme on which to work i.e. the theory of Five Elements (WU XING), which explains how, as in traditional Chinese thought, the elements of nature are related to each other according to a circular pattern in which each element is transformed and generates the next: wood – fire – earth – metal – water. From the first meeting with Liz and Lili (co-director of Tong Production), we kept the dialogue alive and this allowed us to verify the fidelity of our interpretations to traditional Chinese thinking. In this long period of time we also had moments to meet physically with them and show them previews of the work while it was setting up. It was a long but fruitful and extremely interesting work for us.” —— Francesco Gandi, co-artistic director of Compagnia TPO

“It was back to 2015 when TONG Productions began its first collaboration with TPO by presenting one of TPO shows in Beijing. Through a total number of 25 full-house shows in 20 days, the two teams established a real trust and a deep understanding for each other. What is precious is that there is a common goal for producing beautiful but also meaningful shows for children. That ingites my desire to do a co-production based on Chinese culture and philosophy but can be appreciated by audiences from all over the world. Thanks to my overseas study experiences, I learnt to understand and to appreciate different world cultures. There is a growing desire from Chinese families to know better the rest of the world, and there are also families curious about China. Being a local BeiJiner, we are surrounded by historical heritages and rich culture elements. I always wanted to share the story of China with the world in a more interesting way. We were so lucky to have met TPO and found out with each other the right way to work toward this direction. We worked as one team and felt almost no culture barrier at all. It was a great experience working with such a wonderful team. We are proud of Panda’s Home” —— Lizhu REN / Xukun TANG (co-founders of TONG Productions).

2)The performance combines traditional Chinese instruments and digital technology. What can we expect?

“In our productions, technology is present. Indeed it is an integral part of the structure of the show itself, but this does not mean that the technology is visible – or worse, ostentatious. We do not use electronic devices just to show them but to make scenes, images and movement of dancers more natural. So the technology used in Panda’s Home makes the scene fluid, credible, alive, allowing images and sounds to interact with dancers and viewers. The presence of traditional musical instruments on stage has the same function – to make a virtual scene as authentic and real as possible. The sound and the presence of the musician on stage helps to give substance to the idea of China that we would like to express with dance and images.” —— Francesco Gandi, co-artistic director of Compagnia TPO

3) What message/lessons do you think the performance has for young people?

“The journey, the discovery of the other, the curiosity to learn about countries and cultures different from one’s own. But also the strength that comes to us when we are not alone facing danger – the unexpected, the difficulties. The two protagonists are two guys ready to start an unlikely journey following strange traces that later we discover to be of a panda. With this excuse we will explore the boundless territories of China and we will evoke the characters that populate the legends and the world in which a panda lives. The journey, if you face it with curiosity and willingness to change, can become an opportunity for growth.” —— Francesco Gandi, co-artistic director of Compagnia TPO

“The show contains rich Chinese elements. From the philosophy of Five Elements to its natural landscape, from the Chinese calligraphy to its traditional folklores, from traditional Chinese music to typical instrument… but everything is presented in a beautiful yet playful way. We hope the show is like a window to China. From this window, everyone will get a taste of Chinese culture as being so different and being so enormous in terms of content, it is almost impossible to describe in a limited time. This show offers the opportunity for everyone to appreciate this. For somebody who already knows about China, it brings you back to those most beautiful moments in legend and in reality. For those who know little about China, this show is just like the first page of a book into China.” —— Lizhu REN, co-founders of TONG Productions

4) What age group is this suited to and why?

The show is designed for families with children between age 4-9 years as this is the best age when children starts to question what they see and experience. It is always nice when kids start to ask questions or start to discuss with parents after watching the show.
—— Lizhu REN, co-founders of TONG Productions