A Chat with Phil Cummings: Journeying from Page to Stage with ’Space Race’ 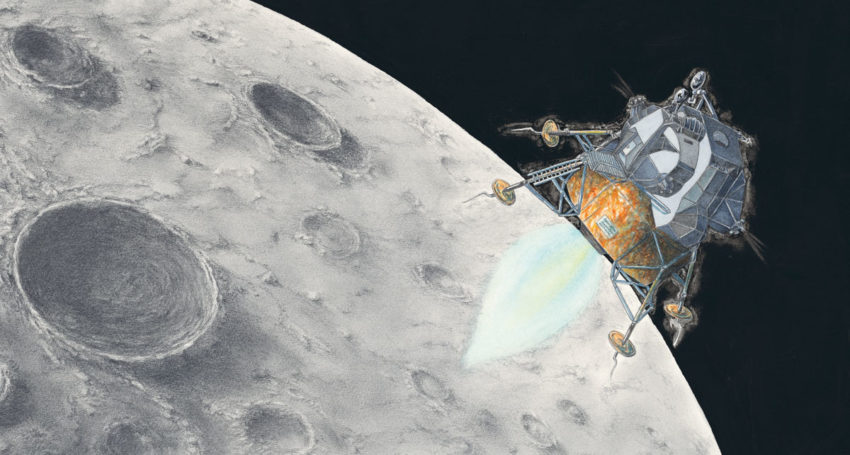 Travel back in time to celebrate the 50th anniversary of the Apollo 11 moon landing as the ASO brings to life award-winning author Phil Cummings’ new book with music composed by Glyn Lehmann.

When the Soviet Union’s Sputnik 1 became the first satellite to orbit the Earth – the race was on! Caught by surprise the US was determined to stay in the race. As the world watched on in fascination, there were also many unforgettable personal moments. Experience the drama and excitement of this incredible time and, amidst it all, relive Phil’s own heart-warming childhood recollection of 21 July 1969.

We chat to Phil about his inspirations and the upcoming performance:

Apart from the moon landing itself what inspired you to want to retell the Moon Landing story as a children’s picture book. Can you recall what you were doing on the day of the moon landing? (Extract taken from book)

July 21 2019 will mark the fiftieth anniversary of the moon landing. The first step was taken at 12.56pm Australian Eastern Standard Time on Monday July 21 1969.
I remember very clearly the day man landed on the moon, as many people around my age do. I was living in a country town called Peterborough 260 kilometres north of Adelaide, in South Australia. It was a bitterly cold day and just as Neil Armstrong was preparing to walk down the ladder and place his foot on the moon, something else incredible was happening outside my window. The wind dropped and my world was suddenly gripped by an unnerving stillness. Then, to my utter amazement, soft gentle snow began to fall. It fell like feathers shaken free from a pillow and floated down without a breath of wind. The only other snow I had ever seen there – and ever did see in all the years I lived there – could hardly be called snow, because it melted before it hit the ground. This particular fall, however, was thick. It was steady, it was gentle, and for a child of eleven, it was magical. And because it was such an incredibly rare event, I found it very difficult to decide whether to stay inside and watch man walk on the moon, or go outside and play in the snow. In the end, I did both. As I watched Neil Armstrong take that step, the snow continued to fall and lay a thick white blanket, about 15 – 20 centimetres thick. It continued to fall long enough for me to be able to finish watching Neil and then go outside, build a snowman, throw a snowball, and leave footprints in the snow just like the footprints Neil Armstrong was leaving for the moon.

I have written this piece, my strongest recollections of that day in the hope that others will share with children their experiences and memories, and encourage children to ponder and be excited by the endless possibilities in their future. Just as everyone was, particularly children, back in 1969.

Describe the journey of how your book ’Touch the Moon’ was transformed from the page to the stage in ‘Space Race’?

My co-collaborator in this project is my dear friend, renowned arranger and composer, Glyn Lehmann. It was when Glyn and I were chatting about projects we were undertaking and setting a writing and production schedule that this first came up. When I was working on the first drafts of ‘Touch the Moon’ I had also written a song – I always write a song when working on a book; it is part of my creative process. I never share the songs with anyone though but on this occasion I did. I played the song, which is called Cold July Day, to Glyn and it captured his imagination. We have actually recorded it and it has been released under our ‘band’ name The Lunar Sea. From there Glyn had the idea to create something bigger. So as the process evolved, I took to writing the lyrics for five more songs that tracked the events and excitement of the Space Race in the sixties. Glyn took the lyrics and created this incredible music. These five songs together with Cold July Day are now the ‘Space Race’ song cycle that will be performed with the Orchestra and the Young Adelaide Voices – I still can’t believe it!

Describe your anticipation in seeing your story Touch the Moon take from the page to the stage?

This is very difficult for me to put in words to be honest; A strange thing to say perhaps as a writer but I find myself turning to clichés – it is a dream come true. One of the most overwhelming things is that there are so many strands to this ‘story’. This is not only about the book; it is my childhood. It is the bringing to life – in story, song, image and music – of a strong memory of an incredible time in my life. When put in those terms, all I can see is how incredibly fortunate I am to have this happen. I’m sure anyone would agree that having a childhood memory, that took place in a very ordinary house in a remote country town, presented in such a powerful way is mind blowing! Suddenly the ordinary becomes extraordinary.

Who will be sitting alongside of you during the world premiere performance?

I am the youngest of eight children – so my family is enormous! They are all so incredibly supportive – so they will there!

Did you provide any instructions to composer Glyn on how you wanted the music to sound?

Apart from the song ‘Cold July Day’ which was a finished work when I played it to Glyn, I let Glyn explore his own creative space. I think that space is very important in creative partnerships and I make the analogy of working with an Illustrator when they are working on one of my books – I allow them creative space for interpretation. As things evolve Glyn and I talk things over during the process. I might have made suggestions about the feel and approach that certain songs might need given the lyric I had created and what I was thinking at the time of writing. Some of the lyrics had a certain ‘flavour’ that I felt might need a particular approach or particular ‘feel’ reflective of the time in which the work was set.

What is your first recollection of seeing and hearing the Adelaide Symphony Orchestra?

Many years ago, as a very young teacher, in my first few months of teaching, I took some children to see the orchestra at the Octagon Theatre (now demolished) in Elizabeth. I think it must have been part of the community program back then. It was very exciting for the children and for me!

As a writer do you have a favourite word or phrase?

Enjoy every passing moment … and revel in the living of the next.

The book is dedicated to the Moroney family, who are there are what are the special memories you’ve shared with them?

The Moroney family lived across the street from us. They have always been good friends to me and my family. We had a lot of fun together; including building snowmen on July 21st 1969!

Today children are spending large periods of time in front of screens as an author what would you say to them to encourage them to find joy through books, writing and or music?

As I sit and write the answer to this question I am in front of a screen so it would be foolish for me to denigrate the importance and obvious influences that screens have on our lives. I honestly believe books and screens can co-exist. There was a time a few years ago when the publishing industry was concerned about the impact of screens on the ‘real books’ in our world. As time has gone on though the two platforms have come to work very well together. There will never be a replacement for the feeling a ‘real book’ offers. I have answered from the perspective of an author and have not gone into the importance of physical exercise and outdoor play… that is something for another time and maybe another book touching on that theme!

At what age did you first find joy in writing? What was your first story that had to be told?

Well, I started writing when I was a teenager. The truth is, I wanted to be a rock star! I listened to the likes of Bob Dylan, Neil Young, Van Morrison, Bruce Springsteen and so on. When I bought records I would, like everyone did then, sit and read the record sleeves over and over and over again. I studied the lyrics and started to write some. So, this is another exciting link to the project – what rock star wouldn’t dream of hearing something they create played by an orchestra!